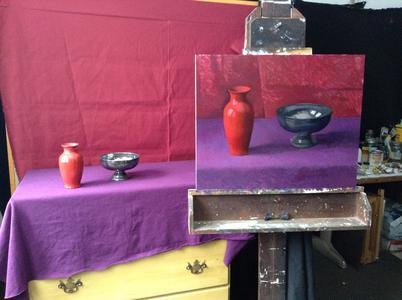 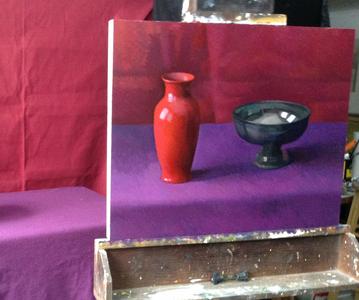 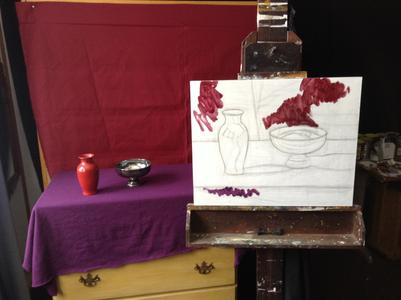 ​Ultimately, what makes still life good subject matter, is you can work on it as long as necessary, here a third pass:

The goal is to get the canvas covered, so the second layer is easier to judge, you don’t want any white spaces to show in between brush marks.

The second layer is like a new start, with so much preparation having been made before. Also, oil paint just looks better in the second layer, like the second coat of a wall, richer:

And work on it some more: 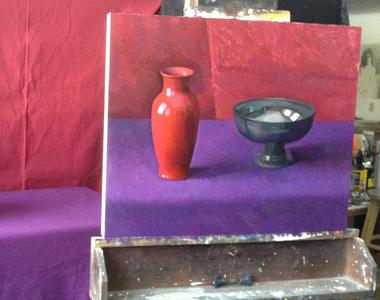 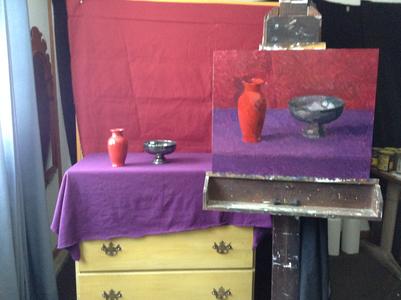 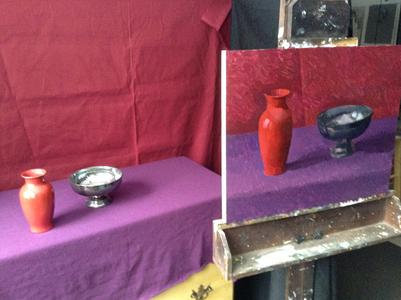 The third pass isn’t any different, although you can start to reach for smaller synthetic brushes, you needn’t stay with the bristle brushes-let the brush selection happen naturally. The colors you mix in the second and third layer, for each spot are the same colors you mixed for the first, the paint just starts to acquire a different feel. Remember every spot on the canvas in unique, it has its own unique hue, value, chroma-the light isn’t exactly the same in every part of the set-up, in this case stronger on the left, and weaker on the right. Wrinkles in the drapery can start to be painted in this stage.

You eventually want the vase to turn imperceptibly, the metal to be convincing with highlights. Remember, there is no trick to painting metal, it is a matter of getting all the values correct, although it is helpful to remember that is reflective, specular (see what it is reflecting, maybe the vase?) 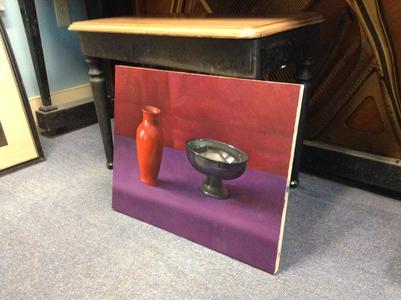 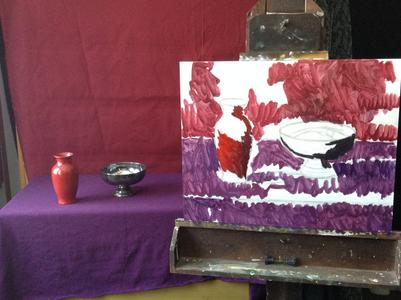 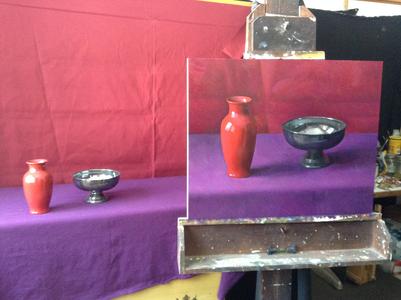 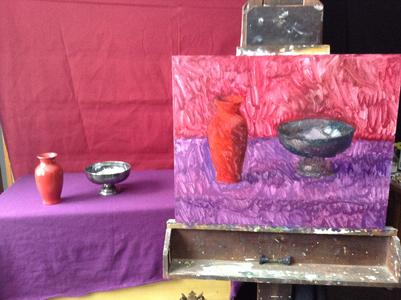 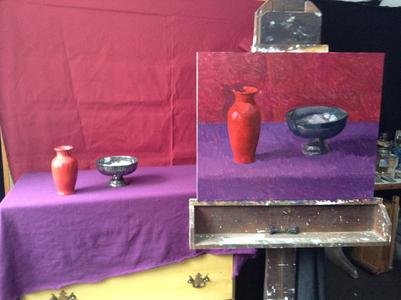 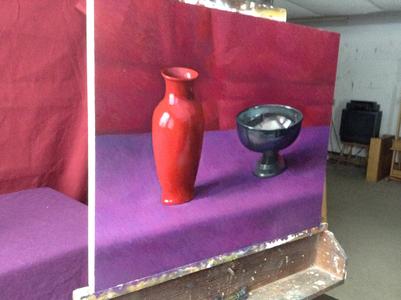 Don’t be worried about repeating yourself, it is good to keep beating down the same trail. If you are unsure where to start, start from the darks, and work towards the lights. If things get ‘sunken in’ use a retouch varnish, either spray or bottle, and then do a new layer of painting over the top. Move around the canvas, work on an area, an hour later a different area (clean palette between though).

There may never be a such thing as finishing, you keep finding smaller and smaller nuances to work on, and eventually you stop because it is better to start a new project. But let the painting play out until the end, until the last page. I like to take the painting into a different room and look at it: 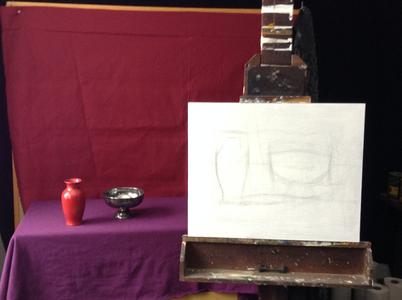 Its always a good feeling knowing you will start the day painting, it’s a very exciting time, the start. In this case, establishing the color was the most critical thing. It is a good idea to not just have one way of going about a painting. No two paintings are exactly the same, so if you go in to it with a plan, be ready to change strategies in the plan falls apart. The thing that matters is the final result. So here, starting loosely with a bristle brush, trying to get the main colors established (correct hue, value, chroma):

Working on still life is one of the greatest practices in painting. So many subjects are fleeting but still life by definition doesn’t change, and doesn’t move. It is very good practice for portraits. When you paint the transition from the shadow side of the face into the light, it is the same issues as painting a vase. Highly recommended to put your set-up next to a north-facing window, as the sun will never enter the room, and you will get a very steady light that you can work all day on.

Ultimately you will determine what is best for your composition. There are basic rules to composition, such as not having two exactly the same size objects, not putting something such as a vase directly in the center of the canvas. But, it has to excite you in some way, or the painting is going to be very unenjoyable. In this set-up, it is really the color combination of reds and violets that I find interesting, in contrast to the cold metal dish. My canvas is a couple of feet back. And I have left room behind me so I can stand back and see it from a distance (important because if it is in a gallery, it is seen from across the room). It is good to have a definite idea in your head of what the final piece will look like (maybe go to museum at this point and study up close some works that are of a similar composition.)

It is important for me to get a good drawing, in this case pencil directly on a panel, the drawing is finalized as the light of the day fades, it will be sprayfixed. In this case no tone needed, because the colors are so chromatic, best to just build them up by layers to keep them bright: 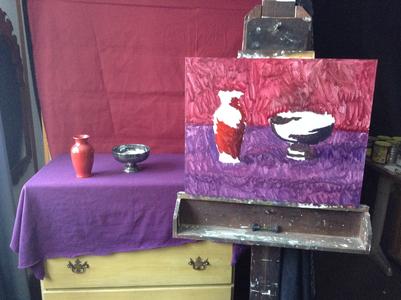 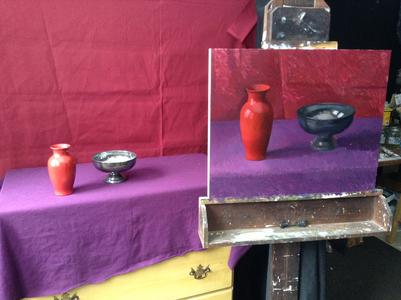 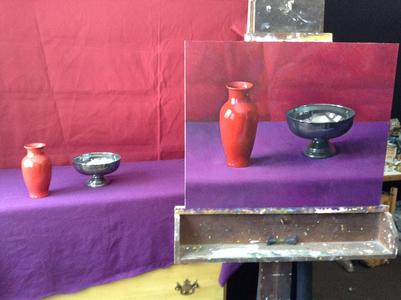 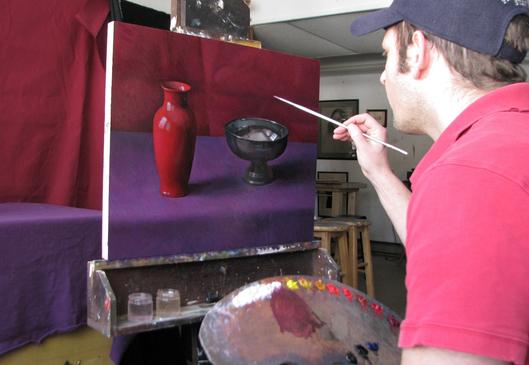 At this stage, the concern is making the vase look reflective by adding the reflections in the shadows (while still keeping them dark enough to read as shadows), and the same for the metal dish, there are many reflections in the shadows. Also, I can go full strength on the lightest lights, which in this case are highlights, very close to white, but of course don’t make them pure white, ALWAYS have some color in them, maybe it’s the blue sky causing them so add some ultramarine. 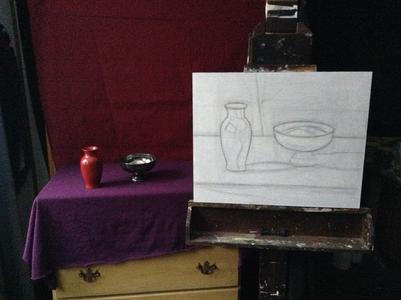 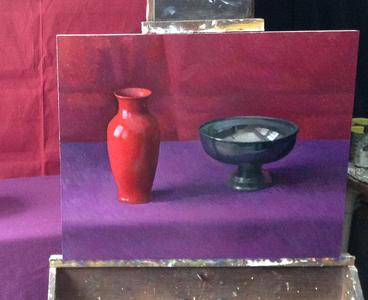 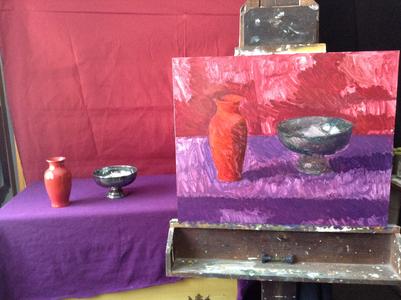 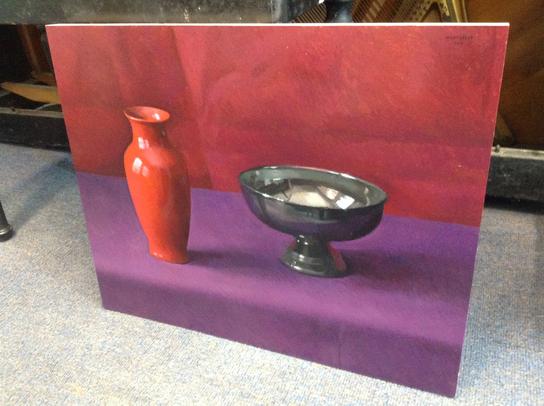 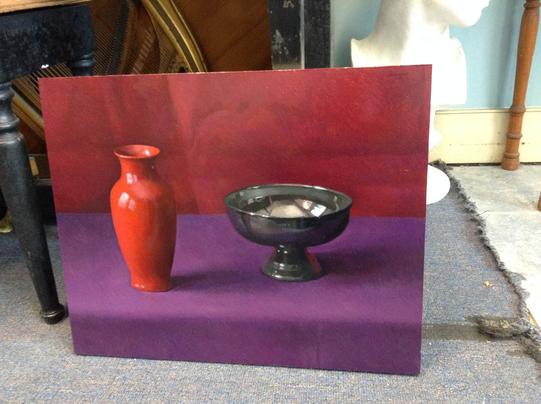 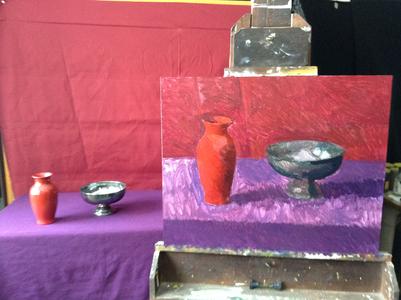 Notes on a Still Life: